Each year on April 14th, National Dolphin Day recognizes the social and intelligent mammals of the water.

Dolphins are cetacean mammals that are related to whales and porpoises. They range in size from 4 feet to up to 30 feet; dolphins are among almost forty species in 17 genera. Found worldwide, they prefer the shallower seas of the continental shelves. 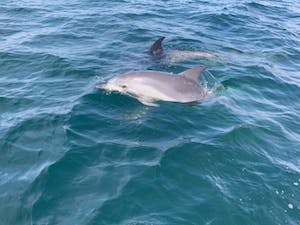 Dolphins are known to have acute eyesight both in and out of the water. They also have a well-developed sense of touch, with free nerve endings densely packed in the skin. Since they additionally have such acute hearing, they can hear frequencies ten times or more above the upper limit of what adult humans can. Dolphins are also capable of making a broad range of sounds using nasal air sacs located just below the blowhole.

Living in pods of up to a dozen dolphins, they are highly social animals. Pods do merge in areas where there is an abundance of food, forming superpods. These pods may exceed 1,000 dolphins. Dolphins can, and do, establish strong bonds within their pods. Even when one is injured or ill, they will stay, helping them to breathe by bringing them to the surface if needed.
You will see the dolphins frequently leaping above the water’s surface. They do this for various reasons; when traveling, jumping saves them energy as there is less friction while in the air. Their leaps even have a name called porpoising. Some other explanations for leaping include orientation, social display, fighting, non-verbal communication, entertainment, and attempting to dislodge parasites.

The United States National Marine Mammal Foundation conducted a study revealing that dolphins, like humans, develop a natural form of type 2 diabetes. This discovery may lead to a better understanding of the disease and new treatments for both humans and dolphins. 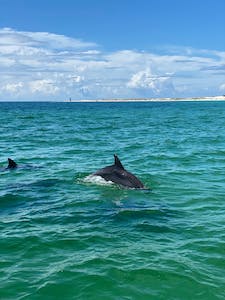 Beat the crowds!  This covered vessel is designed for a limited number of guests creating considerable extra space and “coastal distance” for up to 6 passengers.  Sit back, relax, unwind and safely enjoy an interactive…